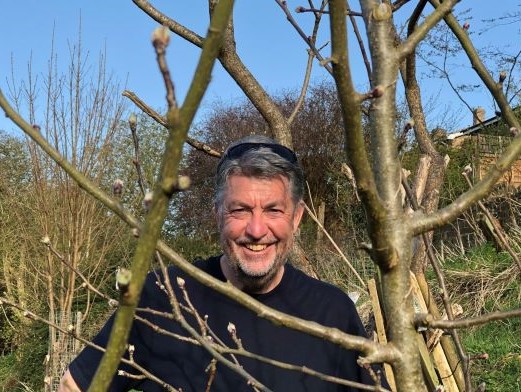 One of the protestors at the high-profile Save Our Trees demo in Stroud in 1989 is urging people to keep planting trees, saying the fight to preserve nature for future generations is never won.

Adrian Oldman, now Green district council candidate for Slade, was one of hundreds of people who helped prevent council contractors from felling the threatened trees in Stratford Park. A camp was set up in and under the trees to provide a round-the-clock vigil to stop them from being cut down to straighten the road outside the new Tesco store. The eight-week vigil was the first successful British campaign to save trees from road-widening.

And this week, after returning for the first time since 2015 to see how they were getting on, Adrian was delighted to see they were still flourishing. “The planting of these trees was symbolic of the triumph of public opinion over bureaucracy and stubbornness a quarter of a century before,” he said. “It was also a living symbol of our hope for the future. It still gives me a tingle when I see those Stratford Park trees still standing to this day, tall, strong and proud, 30-plus years later.

“With spring finally here, I wanted to go back to Sladebank Wood to see how the fruit trees were faring. Seeing them just coming into leaf, and likely to bear fruit for the first time this year, was quite emotional.”

Adrian said that planting fruit trees was a great way to protect nature while getting relatively quick results. “At a time when we are seeing thousands of mature ash being felled here in Stroud District and across the country because of ash die-back, I was reminded of the fact that we often don’t plant for ourselves, but for future generations,” he said. “We have to keep doing that, because the battle to preserve nature for the people who come after us is never won. But fruit trees are a lovely exception to this as they are quite easy to grow and can bear fruit within a few years. They are also great for bees and, of course, are beautiful to look at. And it’s not too late in the season to plant them, as they can be planted any time between October and April.”

For advice on how to buy and plant fruit trees: https://www.rhs.org.uk/apples