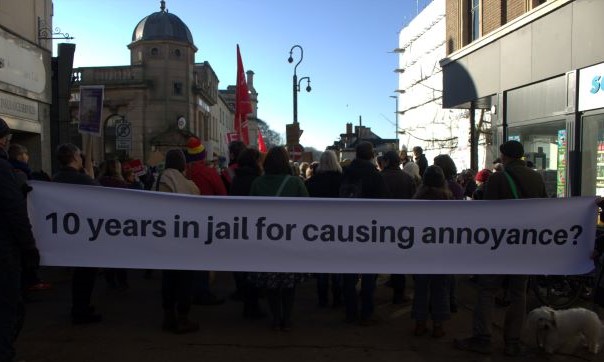 We were delighted to hear that the Lords threw out the worst amendments to the Police Bill. Demonstrations like ours in Stroud – and across the country – played their part in this good news. Below is a letter we are sending to the local press today.

We won important changes!  Many thanks to everyone who came to the tuneful protest against the Police and Crime Bill in Stroud and elsewhere across the country – protests that, ironically, could have been illegal under the proposed law.

Everyone protesting against the government’s attempts to criminalise legitimate protest will be delighted by the defeat in the House of Lords of the most draconian amendments to the Police and Crime Bill. Thankfully, the Lords saw through the government’s bid to make criminals of peaceful protestors, and threw the amendments out. However there are still many authoritarian elements in the bill that should have no place in a modern democracy.

Protest can make a difference – let’s never allow the government to take away our right to protest. Had this law been in place when the suffragettes were protesting a century ago, they would have had to suffer longer in prison and getting the vote could have taken much longer.

Today, there are causes and issues no less important than the right to vote, be it ensuring the Government actually does what is needed to combat climate breakdown, opposing illegal wars like Iraq or even shaming politicians who don’t follow their own lockdown rules.

We have a rich history in Stroud of standing up against what is wrong. I call upon our current MP to join us in standing up for the right to protest.