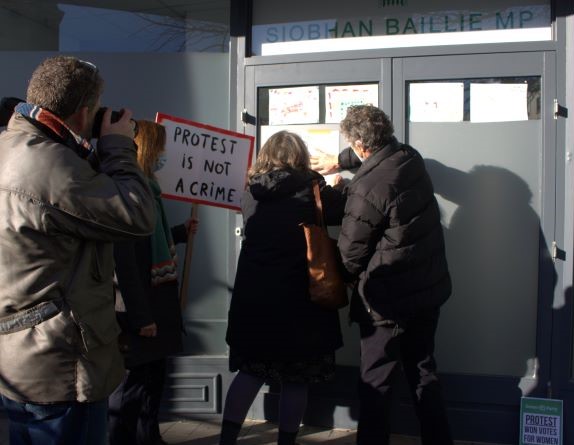 They had planned to hand-deliver a letter to her, outlining why they object to the Bill, but her office was unexpectedly closed, so they taped the letter on her office door instead.

The action was organised by Stroud District Green Party but was joined by dozens of protesters from the Labour Party and from organisations including Amnesty International and Extinction Rebellion.

The campaigners say the Bill criminalises peaceful protest and the letter calls on Stroud MP, Ms Baillie, to stand up for the fundamental democratic right to take part in peaceful protest, which they say will be removed by the Policing Bill.

The Bill reached the House of Lords this week, and crucial votes on amendments will culminate next Monday (17 January).

Speaking at the demo, Stroud District Green Party co-coordinator Martin Whiteside said the “outrageous” Bill would outlaw any protest that causes ‘serious annoyance’, which could mean placards, banners and loudhailers banned. “The bill clearly contravenes the Human Rights Act, which protects our right to protest.”

Moreover, it would make the Roma and gypsy way of life illegal by turning trespass from a civil offence to a crime. “Police will be able to confiscate the homes of gypsies, Roma and travellers and imprison them for up to three months if they stop in the wrong places,” he said. “This is a deliberate attack on a vulnerable minority.”

Cllr Catherine Braun, leader of the Green Group on Stroud District Council, then spoke, saying: “We want to say loudly and clearly that we do not want our historic right to protest to become a crime. This Bill would remove some of our most basic rights and freedoms and enable the government to turn the UK into a police state. It represents an enormous extension of policing powers that would give the police and government the power to ban peaceful protest.”

See the coverage of the event from the Stroud Times here.

BELOW IS THE TEXT OF THE LETTER TO SIOBHAN BAILLIE

The government’s Police, Crime Sentencing and Courts Bill (the Policing Bill) reaches a crucial stage in the House of Lords in the next few days.

The Bill opens the door to powers that would remove some of our most basic democratic rights and freedoms. It would enable the government, or future governments, to turn the UK into a police state.

Amnesty International says this Bill “represents an enormous and unprecedented extension of policing powers which would effectively give both police and government ministers the powers to ban, limit or impose undue restrictions on peaceful protests”.

This already draconian Bill has been made even more dangerous by 18 pages of amendments that have been slipped in at a late stage, without proper scrutiny or debate. Among other things, these amendments would greatly expand police “stop and search” powers, allowing the police to stop and search people or vehicles they suspect might be carrying any item that could be used in “prohibited protests”.

A prohibited protest is defined in the Bill as any protest that has “a relevant impact” on or causes “serious annoyance” to any person within the vicinity of the protest, or that causes “serious disruption” to any organisation. The Financial Times reported on 3 December that “lawyers say this is among the vaguest and most imprecise language they have ever seen”. Material for use in such protests might include placards, banners, loudhailers or any other items commonly used by protesters.

These amendments also give police the right to stop and search people without suspicion, if they believe that protest will occur in a particular area. And they make it a criminal offence to protest if an individual had previously committed “protest-related offences”. In effect, the Bill gives the police, acting under instruction from government, the power to stop any protest. The criminal offences created by the Bill and its amendments carry a maximum sentence of 51 weeks in prison.

The Bill clearly contradicts Article 11 of the Human Rights Act, which protects our right to protest by holding meetings and demonstrations. As human rights organisation Liberty points out: “The State can’t interfere with your right to protest just because it disagrees with protesters’ views, or because it’s likely to be inconvenient and cause a nuisance.”

There is another provision in the bill that causes us alarm: it will turn trespass from a civil into a criminal offence. Police will be allowed to arrest people who are Gypsies, Roma and Travellers (GRT) and confiscate their homes if they stop in places that are not designated for them. Under this proposal, any adult member of the group can be imprisoned for up to three months. We know that there are not sufficient authorised sites and stopping places to accommodate the GRT people who need them; we believe that this is a deliberate attack on a vulnerable minority.

We hope you and your colleagues will do everything in your power to make sure that these extremely dangerous amendments are removed, and then that the Bill as it stands does not move forward. If not, we would be interested to know why you are not prepared to stand up for the human rights that underpin our democracy.

We look forward to hearing from you.