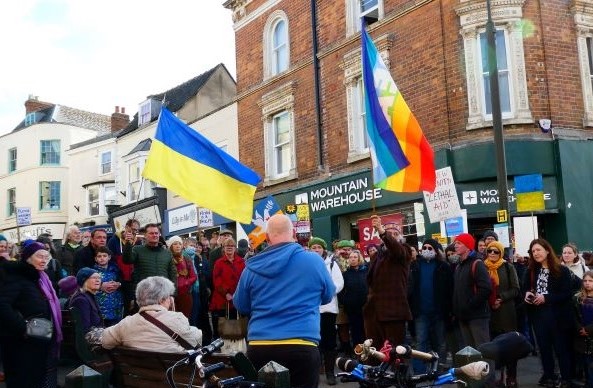 The Council announced that it will end its energy supply contract with Gazprom Energy in solidarity with the people of Ukraine. Stroud District Council’s Cooperative Alliance of Labour, Greens and Liberal Democrats has also called upon all public authorities to terminate contracts with Gazprom Energy, which supplies around one fifth of non-residential gas in the UK.

Councillor Steve Hynd, Deputy Leader of the Stroud District Council Green Group, said: “This contract will end by September at the latest, but we want steps taken to end it now. We should show our solidarity with the people of Ukraine, while isolating the Russian state following their illegal invasion.”
“We would like to see the Government bring legislation that can allow contracts with Russian entities to be broken without any penalty so that all businesses and public authorities can end any commercial relationships linked to the out-of-control Russian regime.”

The move comes after the Green Party urged the government to make it a key national security objective to focus on eliminating Britain’s dependence on gas following Russia’s invasion of Ukraine.

Earlier this week, Green Party Co-Leader Adrian Ramsey said:  “The latest IPCC report makes clear how humanity’s use of fossil fuels has had a devastating impact on our climate and environment. Security experts have long warned that the climate crisis is a major national security risk but Putin’s use of energy aggression in Ukraine strongly underlines this. However, our reliance on oil and gas also leaves us susceptible to major national security concerns, such as those we are currently witnessing with Russia.
“It is imperative that the government starts taking the necessary steps to wean us off this addiction to fossil fuels and develop the renewables and efficiency measures required to ensure we are not beholden to despots such as Putin.

“Our addiction to fossil fuels has encouraged us to turn a blind eye to Putin’s decades of outrages. We have encouraged Russian energy companies and Russian oligarchs into the heart of our economy and society.

“To strengthen European defences against Russian aggression we must install thousands of wind turbines, millions of new solar panels and millions of well-insulated homes. The government needs to treat this with the seriousness it deserves as a potential cause of conflict in the near future.”

Pictured is the recent vigil we organised in Stroud to protest about the Russian invasion of Ukraine.