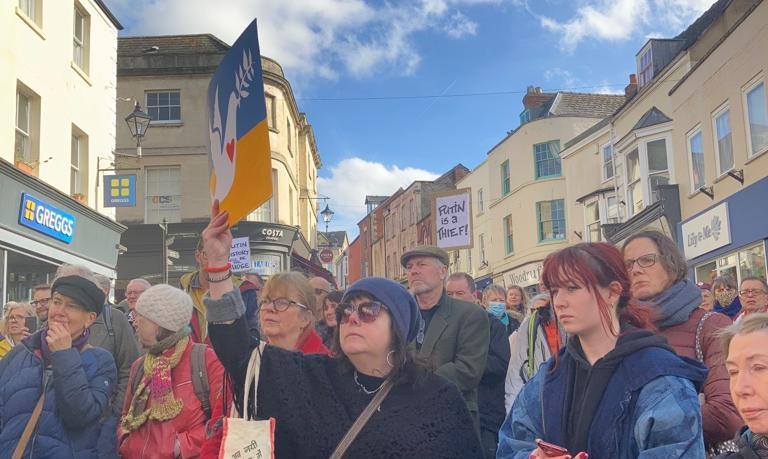 Speakers at today’s Stroud vigil in support of the people of Ukraine called for immediate and strict sanctions against Russia.

The Mayor of Stroud, Kevin Cranston, said the invasion of Ukraine was “completely without justification” and predicted that if Putin gets away with it he will progress to trying to take more areas into Russian control.

“We need really harsh and strong sanctions right now – to cut off Russia completely and make Putin realise what he’s doing Is not acceptable, even to his own supporters,” said Cllr Cranston.

He urged the crowd in Stroud High Street to write to MP Siobhan Baillie and to the prime minister, calling for immediate sanctions to send out a message of solidarity with the Ukrainian people.

Green district councillor Beki Aldam said: “Putin is a poison that has already spread through the veins of Europe. He needs to be stopped. Spare a thought for protesters in Russia who have been arrested in their thousands and face treason charges for saying no to war.”

She called for the UK government to follow the example of Ireland in waiving all visa requirements to allow Ukrainians to come here.

Event organiser Adrian Oldman (Stroud Green Party co-coordinator and a Stroud Town councillor), told the crowd: “We may feel powerless but the optimism of the action is better than the pessimism of the thought. Please write to your MP and to the prime minister. Please show solidarity with people thousands of miles away in whatever way you feel you can, and show that Stroud cares.”

The crowd also heard from Labour district councillor Robin Layfield and from a resident who once lived in Ukraine and Russia, and who has a love for both countries and their people.  The event concluded with the crowd joining in a song of peace performed by JJ, a local musician.