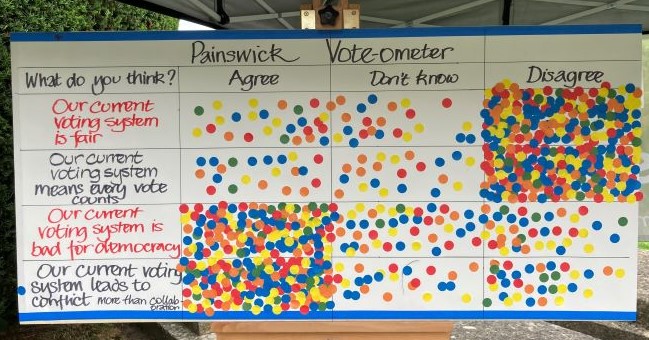 Responses to a survey asking local people for their views on the First Past the Post voting system showed that there is overwhelming support for electoral reform.

MVM, whose members come from across the political spectrum, believes the First Past The Post system is unfair and undemocratic.

People at Sunday’s event were given four coloured sticky dots (there was no political significance to the colours) so that they could ‘vote’ on each of four statements. Over 70% of the more than 200 people who responded disagreed that the current voting system is “fair” and that “every vote counts”. A similar proportion agreed that the current system is “bad for democracy” and “leads to conflict more than collaboration”.

Alan Mossman now plans to take the ‘vote-ometer’ to other communities across Stroud District, to gauge opinions elsewhere. He said: “What this feedback shows is that there is a huge amount of discontent and cynicism about the intrinsic unfairness of the current voting system. The archaic First Past the Post system allows a party to win the majority of the seats in Parliament with fewer than half of the votes. It’s clearly time to overhaul this undemocratic system so that the number of seats directly reflects the number of votes cast for candidates or parties.”

Adrian Oldman said: “The vote-ometer generated an enormous amount of interest, with very few people turning down the opportunity to express their opinion. It was a great way of generating discussion and awareness of the issues.

“The results were convincing. It demonstrated how widespread the dissatisfaction is with our current system and shows that most people put fair play above winning.”