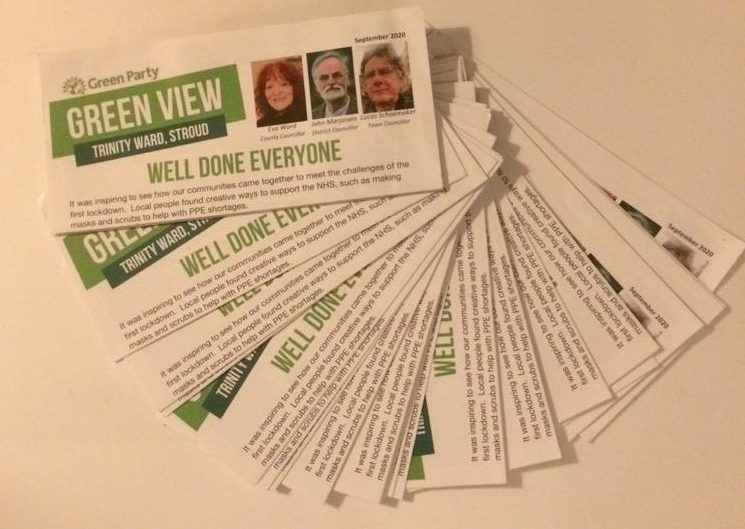 Unless the government drops its “cynical ploy” to prevent smaller parties from distributing campaign literature, this year’s local elections should be postponed, the Green Party has warned.

Martin Whiteside, leader of the Green group on Stroud District Council, says government rules restricting the distribution of leaflets during the run-up to the election – on the grounds of Covid-related safety – are “a deliberate ploy to disadvantage smaller parties”.

The rules prevent parties from using volunteers to deliver leaflets; however, parties are allowed to pay to have deliveries carried out. “It is nonsense for the government to suggest that this is somehow a safer way to distribute leaflets,” said Cllr Whiteside. “The people employed by delivery companies are no less likely to spread Covid than the local residents who normally act as volunteer leaflet deliverers.

“Leafletting in the run-up to an election is a time-honoured method of communicating information and policies to residents by all parties. Limiting leaflet delivery to those parties who have the funds to pay someone else to do it, is a sly and cynical attempt to subvert democracy. How can we possibly have a free and fair election when only the Conservatives, who are bankrolled by donations from big business, are able to campaign without restrictions?”

Cllr Whiteside added: “Candidates have a right to engage with their communities in order to put their case forward in calling for votes. The Government’s instruction on campaigning raises serious questions of a conflict of interest, since the very party most likely to benefit from these rules is the same one that has made the rules.”

Cllr Whiteside said: “Unless free campaigning is allowed during the whole ‘official election period’ starting on March 29, the integrity of the UK’s democratic system will be damaged. Therefore, if the current restrictions continue beyond the end of March, the elections should be postponed.”