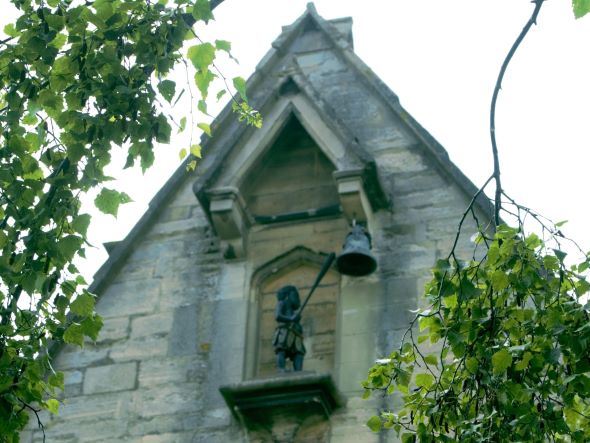 Stroud District Green Party welcomes the decision – carried by a large majority at Thursday night’s meeting of Stroud District Council – to approve the report calling (among other things) for the removal of the controversial Blackboy clock and statue in Castle Street.

Four Green councillors spoke on the subject during the Council debate. Cllr Beki Aldam (Brimscombe and Thrupp) told the meeting that, just as buildings are altered, pulled down or restored, according to need, statues are subject to how society re-evaluates and re-examines its values.

“Everyone who loves history knows that this isn’t destroying history,” said Cllr Aldam, who is a history teacher. “Statues are looked after, wherever it is decided the best place is for them to reside. This is looking again at who is venerated and represented in our public spaces, and how we do that.”

Cllr Chloe Turner (Minchinhampton) accepted that the consultation attracted polarised responses and that the issue was emotive. “But the majority view is very much in favour of removal.”

She pointed out that Blackboys House is not the first home of the clock. Its first location was a shop front then it was moved to a pub before being erected at its current location. “Its next resting place may well be a museum if that’s the view of the majority of residents of Stroud,” she said.

Cllr Norman Kay (Nailsworth) mentioned another recommendation voted through by councillors: to restore and promote the Anti-Slavery Arch in Paganhill, which was built in 1834 and most recently restored by the council in 2001. “The Arch isin its own way as important as the Blackboy clock and statue,” he said. “It’s something about which we should be extremely proud. We should think about how best to celebrate the Arch as it’s a very important aspect of our views about colonial history.”

Green Group leader Cllr Catherine Braun (Wotton-under-Edge) said at the meeting she was proud of the cross-party work that led to the report, which included a statement by the leaders of all four political groups following the Black Lives Matter protests in 2020, condemning racism and reaffirming the council’s commitment to promoting equality and tackling discrimination.

The whole community had been involved in the consultation, said Cllr Braun. “This kind of work has to be done in a space of reflection and understanding, and the review panel has done that. The consultation had a phenomenal response. It’s rare that residents take time to respond to issues that don’t concern them on a daily basis.”

She added that the words most frequently used in residents’ responses when asked to describe how the Blackboy clock made them feel, included “uncomfortable”, “ashamed” and “saddened”.

Cllr Braun commented: “We have to listen to what people are telling us and listen to the majority of voices about how this should be taken forward. It may not be possible to proceed with removal, due to complications around ownership and planning, but we will proceed at every stage with community engagement and with consultation.”

Reacting to the council being described as ‘woke’ in the Daily Mail’s coverage of the Blackboy story, Cllr Braun commented: “Presumably the word ‘woke’ is intended as an insult, but for the progressive parties – and the people of Stroud who overwhelmingly support these recommendations – it is a compliment, a badge of honour, the derogatory term ‘woke’ actually meaning empathetic, caring about social and racial justice and being sensitive to the feelings of oppressed minorities.”

Of the 39 councillors present at the meeting, 25 voted for the recommendations and two against. There were 12 abstentions.