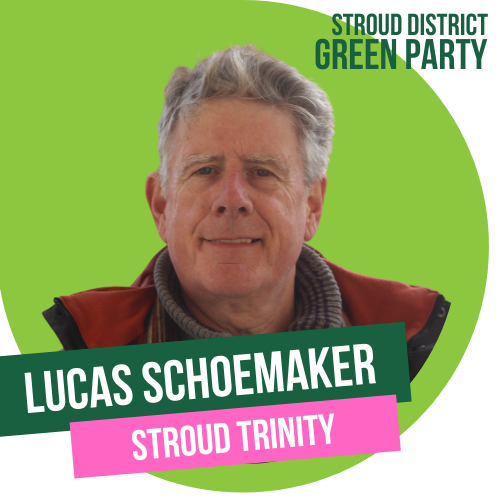 Lucas Schoemaker has lived in Gloucestershire since 1979, originally as a herdsman on a farm in Frocester. He moved to Stroud in 1984, having ‘discovered’ the town and loving its vibrancy when working as a heating engineer.

Since living in the area he has been involved in many initiatives set up to address social and economic needs, including: WATNOT recycling, Lansdown Hall, Five Valleys Foyer, The Exchange social enterprise centre and Oakbrook Community Farm. In his professional life Lucas works with housing associations, community interest companies and individuals to help them meet their challenges.

“Communities should work for everyone, and we all play a part in co-creating truly fair societies,” he said. “Local solutions should be found to local needs, through working with other local people.”

Lucas believes in progressive local solutions such as credit unions, community focused affordable housing, and co-housing projects. He is sceptical about corporate solutions, such as the Gloucester incinerator, nuclear power and major road-building.

His early life in the Netherlands gave Lucas exposure to the Dutch style of voting, which is much fairer than our current unfair First Past the Post system. This made him a firm believer in proportional representation – with PR every vote counts - and he is a campaigner for the pressure group Make Votes Matter.

Lucas lives with his partner in Trinity, the ward he has represented as a town councillor since 2011. His hobbies include singing in a community choir, gardening, exploring the British Isles and admiring the exploits of his five grown-up children.

Littering, and not clearing up after dogs, is unhygienic and it can result in a fine. Lucas wants to see our beauty spots kept beautiful.

Lucas is pushing the county council to repair potholes faster and better, and is keen on active travel schemes to make roads safer for drivers and cyclists.

Lucas believes local children should be able to go to local schools. He opposes the closure of Severn View School, which will mean long journeys for some pupils.

We believe in being brave, in speaking our minds and together we can do politics differently

Get on your dancing shoes: barn dance in Coaley on May 28 in aid of Stroud Green Party

A barn dance is being held at Coaley Village Hall on Saturday May 28 from 8pm to 11pm. Tickets for the ‘Dance for Nature’ at the venue in The Street, […]

How we can fight nationalism, racism and fascism through alliances with the marginalised

Fighting back against nationalism is the topic of an online discussion on Wednesday June 1 from 7.30pm to 9pm. The event will explore how nationalism and populism can be countered […]

Humorously exposing the lies of government: our next Cloud Café explores the uses of satire

The use of satire as social commentary is the topic of an online discussion on Wednesday May 4 from 7.30pm to 9pm. Speakers from political activist collective Led by Donkeys […]

Stroud District Green Party wrote yesterday to MP Siobhan Baillie asking her to clarify her position on the prime minister’s energy strategy, which focuses on nuclear and fossil fuels despite […]

Anti-poverty campaign is launched in Stroud

A campaign group is being set up to campaign for changes to the national policies that are causing the increasing cases of poverty in Stroud District. The first meeting will […]

Stroud and enslavement: what’s the legacy and what should we do about it?

The legacy of enslavement in Stroud and beyond will be the topic of an online discussion on Wednesday April 6 from 7.30pm to 9pm. A panel of speakers will discuss […]

Stroud District Green Party has responded to today’s statement from Stroud District Council about the council’s gas contract with the Russian supplier Gazprom Energy. The Council announced that it will […]

Speakers at today’s Stroud vigil in support of the people of Ukraine called for immediate and strict sanctions against Russia. The Mayor of Stroud, Kevin Cranston, said the invasion of […]

A demonstration in support of the people of Ukraine will take place in Stroud High Street at 1pm tomorrow (Saturday February 26). Concerned residents of all political persuasions or none […] 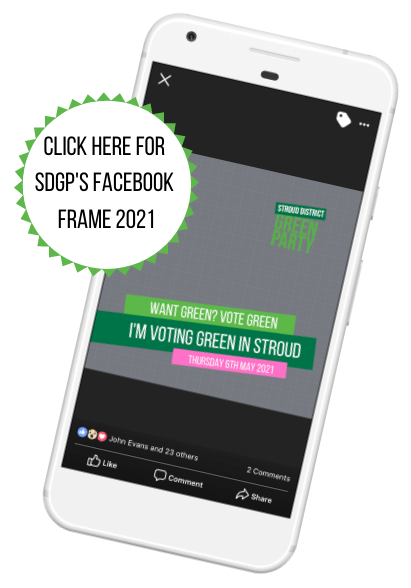 Get involved with SDGP