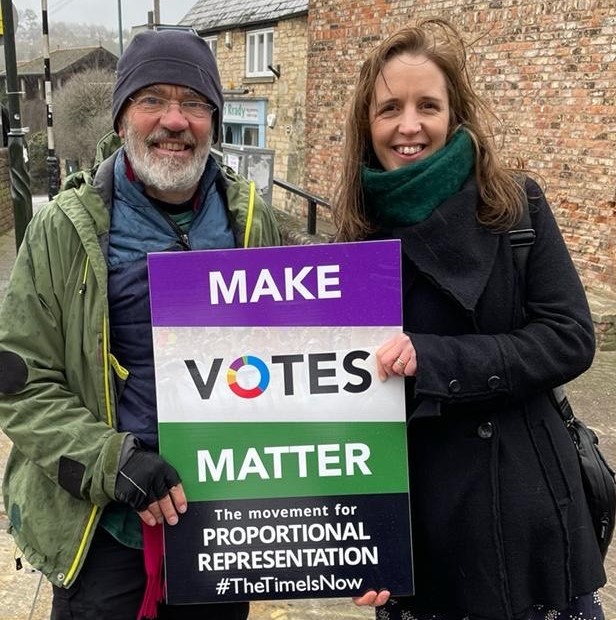 Campaigners for a fairer voting system gathered in Stroud High Street on Saturday to raise awareness of the dangers of the Elections Bill, which is currently being debated in Parliament.

They spoke of how the Bill, if it goes through, will lock millions of citizens out of the democratic process, and hand greater powers to Government ministers to control elections.

Among other issues, the requirement for photo ID would lower voter turn-out and deny the vote to the hundreds of voters in the Stroud Constituency – particularly low-income families and older people – who do not have driving licences or passports.

Cllr Braun, leader of the Green group on SDC, told the rally: “At the 2019 general election there were only four convictions for electoral fraud across the United Kingdom. This is hardly a problem that requires a solution costing £120million. It’s hard to believe that Tory MPs who called Covid passes an infringement of their liberty, are now supporting this new ID system, which would limit the most basic right of the citizen – the right to vote. This is more about voter suppression than dealing with fraud.”

She explained that the current First Past the Post system allows a Government elected with fewer than half of all votes to have a huge majority in Parliament and to force through laws that have no public support. “FPTP is a terrible system,” she said. “As many as 70% of votes don’t count in the result. It creates bad government, and bad outcomes for the country.”

All these proposals add unnecessary cost and complexity to our already confusing election rules, said Cllr Braun, and the Bill is being actively opposed by all the opposition parties and by charities, academics and civil society groups. “Even the Parliamentary Committee tasked with reviewing the bill did not support it,” she pointed out. “The Tory chair of the committee said the government had not provided good enough evidence to support the bill.”

She said that reviewing electoral law could be a great opportunity to improve and strengthen our democratic process. “But this Elections Bill does nothing to tackle the fundamental issues with electoral law, and it misses a crucial opportunity for genuine reform.

“We need to continue to campaign for a better system than the one we currently have. A system that doesn’t give reactionary governments unchecked power to drive through bills like this, which damage democracy. A system where citizens turn out to vote, because they know that whatever party they vote for, their vote will be taken into account. A system where parties have to work together in the best interests of citizens and the country, as they have in most other democracies around the world.”

She added: “We’re now looking to the unelected House of Lords to stop this terrible Elections Bill –to strike out the worst provisions and support an independent electoral system in this country.”

Five reasons why the Elections Bill should be opposed

The Bill proposes to extend the First Past the Post system – and to introduce it for the first time in elections for mayors and police and crime commissioners. Because most votes don’t count towards the result, this will make elected officials less accountable to their communities and electorate and will discourage people from voting.

The Bill proposes to introduce voter ID, yet an estimated 24% of the electorate don’t have photo ID. Even for those who do, having to produce an extra document at the polling station could discourage many from voting. Hundreds of voters in the Stroud Constituency would lose the right to vote.

The Bill proposes to strip the Electoral Commission of its independence. This is a blatant power grab by the Government, which wants the Electoral Commission to operate under the government’s priorities on electoral matters.  A parliamentary committee has concluded this unnecessary change “risks undermining public confidence in the effective and independent regulation of the electoral system”.

The Bill would introduce new spending rules that could lock out small campaigns, unions and charities from politics. Ministers would have the power to remove a type of organisation or a category of individuals from a list of those entitled to spend more than £700 on campaigning in the year before an election. Freedom of speech, as expressed through election campaigning, will be placed under direct political control. This will have a chilling effect on the activities of charities, trade unions and campaigning organisations.

The Bill would change the rights of residents born outside of the UK to vote in local elections.  Only people who arrived in the UK before the end of 2020 will be able to vote – unless the UK happens to have a bilateral agreement with the voter’s country of origin. This would put England and Northern Ireland out of step with the rest of the UK, as Scotland and Wales allow all legally resident people to vote in local elections.