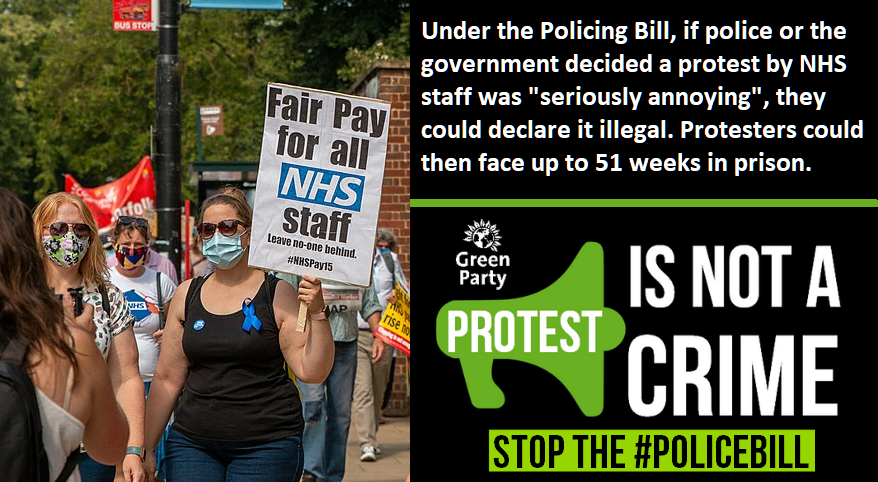 Local people of all political persuasions are invited to gather on Friday (January 14) at 12.30pm outside the Stroud office of Siobhan Baillie MP to protest against the government’s plans to criminalise peaceful protest.

Carrying placards with the message ‘Protest Is Not a Crime’, the protesters will deliver a letter calling for Ms Baillie to stand up for the fundamental democratic right to take part in peaceful protest, which they say will be removed by government’s Police, Crime, Sentencing and Courts Bill (the Policing Bill).

The Bill reaches the House of Lords this week, and crucial votes on amendments will culminate next Monday (17 January).

Friday’s protest is organised by Stroud District Green Party. Cllr Catherine Braun, leader of the Green Group on Stroud District Council, said: “The Policing Bill threatens to remove one of our most basic human rights: the right to peacefully protest. And the amendments to the Bill that have been slipped into it by the government at a late stage make it even worse.

“The Bill and its amendments would give the police, acting under instruction from government, the power to stop any protest if they think it will cause ‘serious annoyance’ to two or more people or an organisation. It would also allow the police to arrest anyone they think may be planning to take part in such a protest. People charged under these laws could be jailed for up to 51 weeks.

“These are the kind of powers used by dictators, and they create the conditions for this government, or any future government, to introduce a police state.

“The Bill could be used to criminalise people taking part in climate-related protests, nurses and doctors protesting for better PPE, or any other group that the government might find annoying. We are calling on all MPs and members of the House of Lords to stand up for our basic human rights and reject this extremely dangerous and anti-democratic Bill.”

The Policing Bill has been condemned by a wide range of campaigning organisations and by leading lawyers. Civil liberties organisation Liberty says that it contradicts Article 11 of the Human Rights Act, which protects people’s right to protest by holding meetings and demonstrations.

The human rights organisation Amnesty International says the Policing Bill “represents an enormous and unprecedented extension of policing powers which would effectively give both police and government ministers the powers to ban, limit or impose undue restrictions on peaceful protests”.

Baroness Jenny Jones of the Green Party, who has been leading resistance to the Bill in the House of Lords, said: “These draconian laws, which will make effective protests illegal, should be seen as part of the attack on our democracy designed to keep a corrupt government in power and minimise opposition. Ironically, it could be the government’s attempt to bypass parliamentary scrutiny by MPs that enables the Lords to defeat these 18 pages of new amendments.”

The Green Peers are urging Labour peers to join them in opposing the dictatorial powers within the Policing Bill.