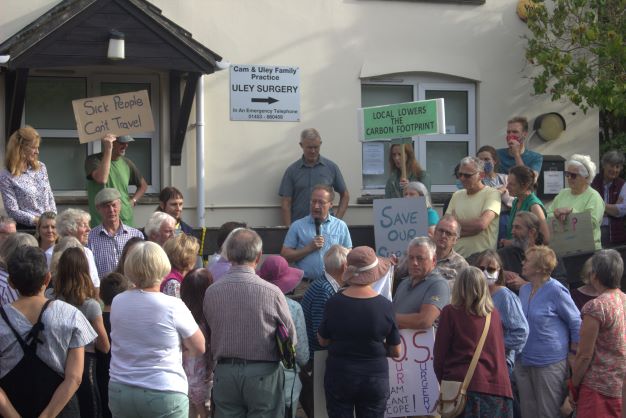 “It was very pleasing to see such a good turn-out, and I really enjoyed the grass-roots feel of it, talking directly to people on the street,” he said of the event he helped to organise.

Cllr Pearcy told the crowd: “We are here to send a clear message that for the people of Uley, Nympsfield and Coaley this surgery is an essential service, particularly for those who are vulnerable, elderly or on low incomes who have no transport. It is loved and needed; please don’t close it down.”

He emphasised that the bus service is unreliable and infrequent, taxis can cost £22 for a round trip to Cam and that cycling isn’t an option because the roads aren’t safe for cyclists. “These journeys will increase congestion and pollution,” he pointed out, “and where are people supposed to park in Cam when they get there?”

Cllr Melanie Paraskeva, chair of Uley Parish Council, also spoke, saying the surgery is a cornerstone of village life and that its threatened closure had left the community feeling “shaken”.

Pictured is Cllr Pearcy addressing the crowd, with Cllr Braun behind him holding the green placard.