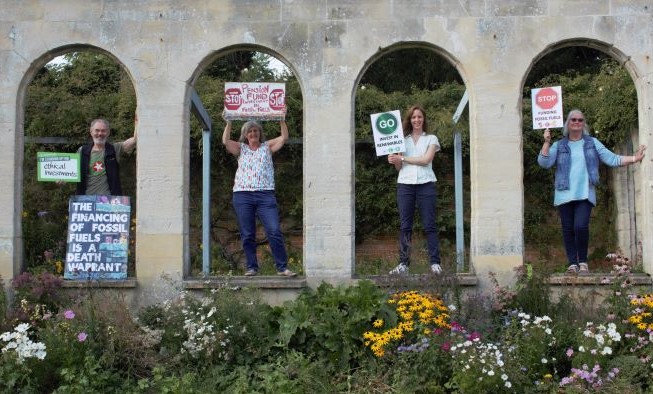 Stroud residents who are members or pensioners of local authority pension funds have joined calls for fund managers to divest urgently from investments in fossil fuels.

This follows a recent protest in Bristol outside the offices of the Brunel Pension Partnership (BPP), which manages funds for Gloucestershire County Council and nine other authorities. Campaigners from South West Action on Pensions (SWAP) held the protest to raise awareness of the fact that, despite having declared climate emergencies, Gloucestershire County Council and others continue to invest pension funds in fossil fuels.

“This is my money that we’re talking about, and I should have a say in how it’s invested,” said Stroud resident Raje Airey. “I don’t want it used to prop up fossil fuel companies. It’s ironic that these funds are meant to give people a comfortable retirement, yet they are supporting companies whose actions threaten the very planet – making a comfortable retirement an impossibility for future generations.”

Stroud Town councillor Stella Parkes, who has a local authority pension from a previous job, said: “The environment is a huge concern for me and for many others with local authority pensions. When we entrust our pension contributions to a fund manager we do so on the assumption that they will take an ethical approach to investments.”

Alan Mossman, a Stroud resident with a local authority pension managed by Brunel Pension Partnership, said: “Many councils have declared climate emergencies and so should already have instructed their fund managers to divest from investments that damage the environment.”

Cllr Catherine Braun, leader of the Green Group on Stroud District Council and Deputy Leader of the Council, said: “We totally support South West Action on Pensions’ demand that council pensions are 100% divested from fossil fuel companies by 2025 and invested instead in climate-friendly funds. We cannot understand why the Brunel Pension Partnership still has £837million invested in fossil fuels. Clearly, this puts Brunel’s investment policy at odds with the urgent need – highlighted by the Intergovernmental Panel on Climate Change (IPCC) report published in August – to tackle climate change.

“It is nonsensical that many councils, despite having declared a Climate and Ecological Emergency, and despite the IPCC’s alarming report, still allow their pension funds to be invested in companies that explore and extract fossil fuels. This has to change: the pension fund members whose money is being invested in this unethical manner need to have a say.”

In an email to SWAP, Brunel agreed that the climate change challenge is urgent, that pension funds should invest sustainably and that the economy should shift away from fossil fuels. However, it said simply divesting from fossil fuels is not enough to address the problem; funds need to reduce their exposure to carbon across all sectors of the economy.

BPP said it invests relatively little in fossil fuels anyway, has had ‘radical’ improvements in carbon exposure and believes that engaging with companies and threatening to divest from them is more effective than simply divesting, as the latter allows companies to continue with their current practices.

Reacting to this, Alan Mossman said: “Pension fund managers have been saying this kind of thing for years. It’s no longer good enough. Urgent action is needed to re-assess investment policy in light of unequivocal evidence from IPCC’s August report about the seriousness of climate change.”

Meanwhile, Stroud District Council is committing to establish an ethics policy for its investments, which will include the wish to divest pension funds from fossil fuels.

For more information about the campaign and SWAP: https://dtaction.co.uk/pension-divestment/