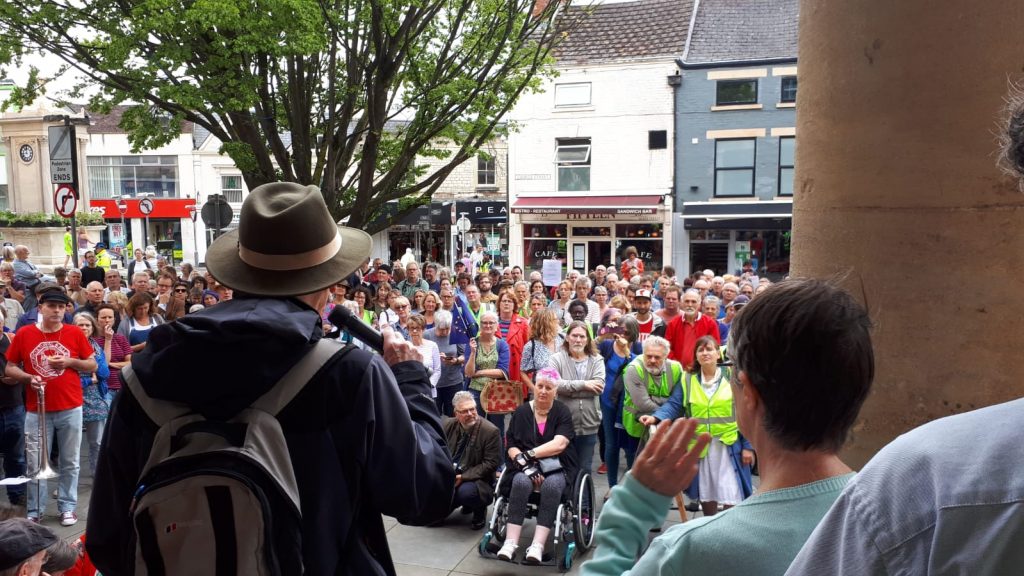 The new Police Bill could see peaceful protest, like the one in the picture of a demo in Stroud in 2019, outlawed. Below is our open letter to Siobhan Baillie MP, which was published in the Stroud News & Journal

Thank you for your email explaining why you are supporting The Police, Crime, Sentencing and Courts Bill. We strongly disagree with you on several points.

Firstly, to call the criticism politically motivated misinformation is to ignore the outcry and rejection of this Bill from a wide range of sources, from the RSPB to Theresa May.

We in the Green Party are particularly concerned with the section on public order as anyone should be, including yourself, if you care about the freedom and rights of your constituents.

Some parts of the Bill appear to be designed to shut down anyone the government doesn’t agree with, using spurious objections such as being too “noisy” – who gets to decide what level of noise is acceptable? Are protests to be silent from now on? Would you be prepared to be silent if there was something that you felt warranted your protest?

The section in this Bill on protests is not clearly defined and gives the police and government too much power to interpret in a way that suits them. If the Bill is passed, police will be handed new powers to control the length of protests, impose maximum noise levels and prosecute activists for causing “serious annoyance” – a concept we argue has not been clearly defined.

We also object to the fact that this extremely important and wide-ranging Bill is being rushed through Parliament, without proper discussion in the house. Already Network for Police Monitoring have reported their concerns about the policing of gatherings on Parliament Square on 15th March where legal observers were arrested. These demonstrations had themselves arisen from the police response to women demonstrating on Clapham Common earlier. The UN Human Rights Committee have clearly stated that legal observers “must not face reprisals or other harassment, … if an assembly is declared unlawful or is dispersed, that does not terminate the right to monitor”.

We live in a democracy and this Bill will erode the fundamental liberties that we all enjoy – many of your constituents will feel very strongly about them being taken away.  As your constituents, we ask that you don’t support the Bill in its current form as it is designed to quash dissent.

Suffragettes were noisy and protested and they were even dubbed “terrorists’” at the time. Thank goodness they fought for what they believed in, or you would not be sitting as an MP today – your current privilege is a direct consequence of the protest that has gone before you.

We were further shocked and appalled by this Bill’s rhetoric on both the BLM and the Extinction Rebellion protests. Members of the BLM movement and Extinction Rebellion have been forced to demonstrate because so little has been done about institutionalised racism and the climate emergency. Their protests, whilst inconvenient and shaming for the Government, who are doing so little about their concerns, are largely peaceful.

Extinction Rebellion, as you know, has its roots in Stroud and far from being criminals, is peopled by parents, grandparents and children – many of your constituents. People who are terrified that the planet won’t sustain us if we carry on as we are. Conservative MPs could not even bring themselves to vote to keep air pollution levels within the safe realms advocated by the WHO, so it is not surprising that people have to take matters into their own hands. We believe that the Conservative Government is out to criminalise legitimate expressions of concern for our children’s future.

We, your constituents, ask you to vote against the Bill in its current form and to respect democracy.